WHERE DO GREENHOUSE GAS EMISSIONS COME FROM?

Greenhouse gas (GHG) emissions are produced when hydrocarbons, such as natural gas and oil, are burned. GHGs include carbon dioxide (CO2), methane, nitrous oxide and ozone, all of which contribute to climate change.

Natural gas and oil are burned for electricity generation, industrial uses, transportation, and to heat homes and commercial buildings. In fact, the majority of GHG emissions are released at the end-user stage when consumers use natural gas and oil for heat, electricity, fuel and other important products.

According to the Government of Canada, Canada’s total GHG emissions in 2018 were 729 megatonnes of carbon dioxide equivalent (MtCO2e). Globally, Canada’s share of GHG emissions is less than 1.5%. In 2018, the oil and gas sector accounted for 193 megatonnes of carbon dioxide equivalent (Mt CO2 eq) (26% of total emissions), followed closely by the transportation sector, which emitted 186 Mt CO2 eq (25%).

The challenge: reduce GHG emissions while the demand for energy is growing.

In 2020, the Government of Canada introduced A Healthy Environment and a Healthy Economy that includes measures to exceed the 2030 target and advance Canada’s emissions to net zero by 2050.

The natural gas and oil industry is regulated by provincial and federal governments through programs to reduce GHG emissions such as:

Natural gas can play an important role in reducing Canada’s GHG emissions. For example, the electricity sector’s emissions dropped from 130 megatonnes in 2001 to 64 megatonnes in 2018, as power plants switched from coal to natural gas. Electricity powered by natural gas is forecast to increase from 10% in 2016 to 16% in 2040.

With electrification of upstream natural gas production, Canadian LNG facilities will have lower life-cycle emissions intensity than LNG produced anywhere in the world. 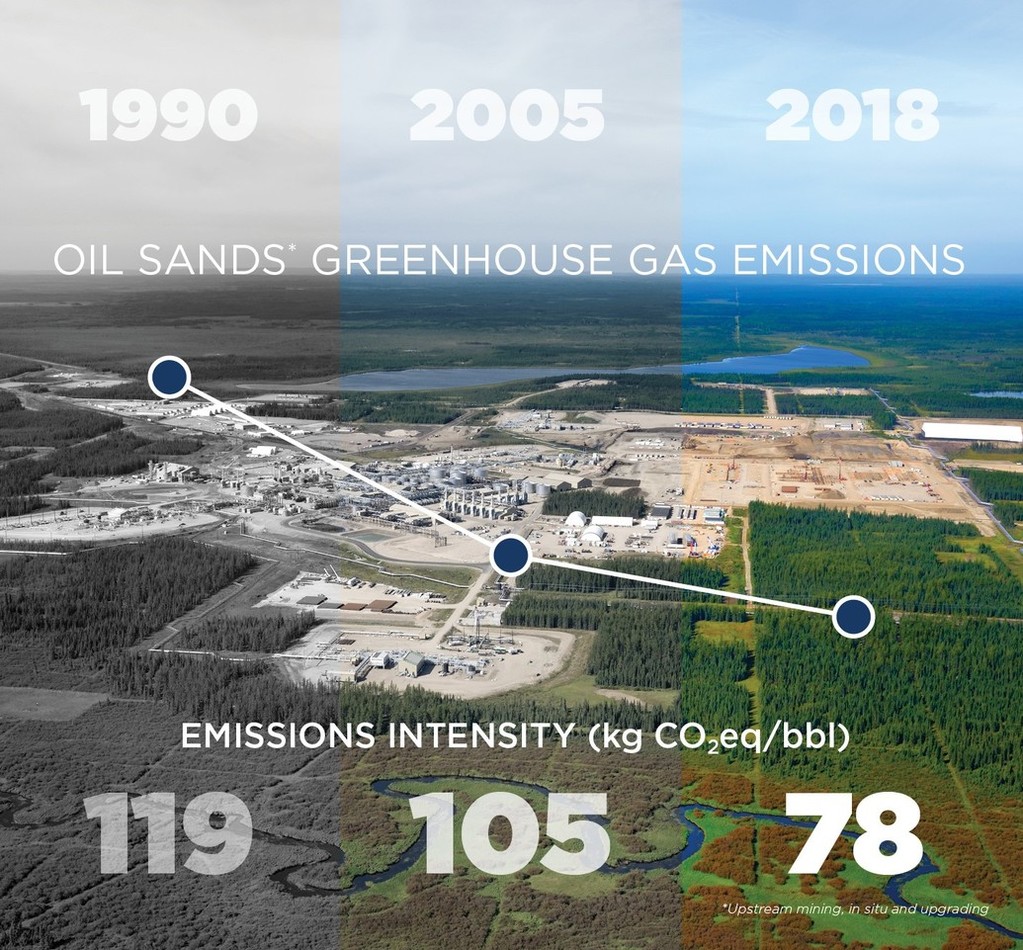 In oil sands mining, energy is needed to transport the ore, break it down into smaller pieces, and to heat the water used to separate the oil from the sand. Energy is also required to generate steam for in situ recovery methods. The industry is taking action to reduce emissions at every phase in the extraction process, both mining and in situ.

GHG Emissions in Energy and Other Industries

In addition to CO2, other air emissions associated with oil sands development include nitrogen oxides (NOX), sulphur dioxide (SO2) and fine particulate matter (PM), which are primarily created through fuel combustion in facilities and vehicles.

Across the natural gas and oil industry, the most effective action on climate change is achieved through innovations that help reduce emissions. In addition to the collaborative work being done by Canada’s Oil Sands Innovation Alliance (COSIA), Petroleum Technology Alliance Canada (PTAC) and many other industry organizations, individual companies are also taking the lead. Recent examples include:

MEG Energy plans to use carbon capture to become a zero-emissions facility.

What is Article 6? Why does it matter to Canada?