With a diverse wildlife population throughout Canada's oil and natural gas producing areas - including offshore - protecting species and habitats is an important consideration in project planning.

Canada’s oil and natural gas industry minimizes impacts of operations on land and wildlife by:

The Government of Canada introduced the Species at Risk Act to protect and provide recovery of wildlife species that:

In both Alberta and B.C., governments have strategic plans and regulations in place to protect endangered species. Industry also participates in a number of initiatives that focus on long-term strategies to protect wildlife.

Atlantic Canada’s offshore industry is committed to developing resources responsibly and strives at all times to mitigate potential impacts on the environment. The industry is governed by a robust regulatory regime and companies meet or exceed all environmental protection regulations while also adhering to global best practices.

Because oil sands developments are extensive, producers make efforts to minimize impacts to wildlife habitat by minimizing the area needed for well sites, and by working with other landscape users to reduce disturbance by sharing roads and pipelines.

Oil sands operations have specific wildlife mitigation and monitoring plans in place that require regulatory approval before operations begin. These programs are developed for each project with results and progress reported to the regulator. The programs typically include habitat enhancement, restoration, and monitoring

Caribou are among Canada’s most recognizable national symbols, but populations are falling across Canada. There is much research and data being collected following the caribou populations in Canada in order to learn more about these animals and the complexities of the threats they may be facing in each region.

Caribou are affected by changes to their habitat. These natural and man-made disturbances can range from seismic lines used to explore the underlying geology, to forest fires that naturally regenerate the forest. Caribou have low reproduction rates. Females don’t produce young until three years of age, and then have only one calf per year.

Large animals like moose, deer and caribou use old seismic lines as travel corridors as these disturbances are easier to move through than heavy forest, and have edible shrubs along the edges. However, these corridors also concentrate predator-prey interactions as predators learn to use them to hunt more efficiently.

Population and Distribution of Boreal Caribou in Canada 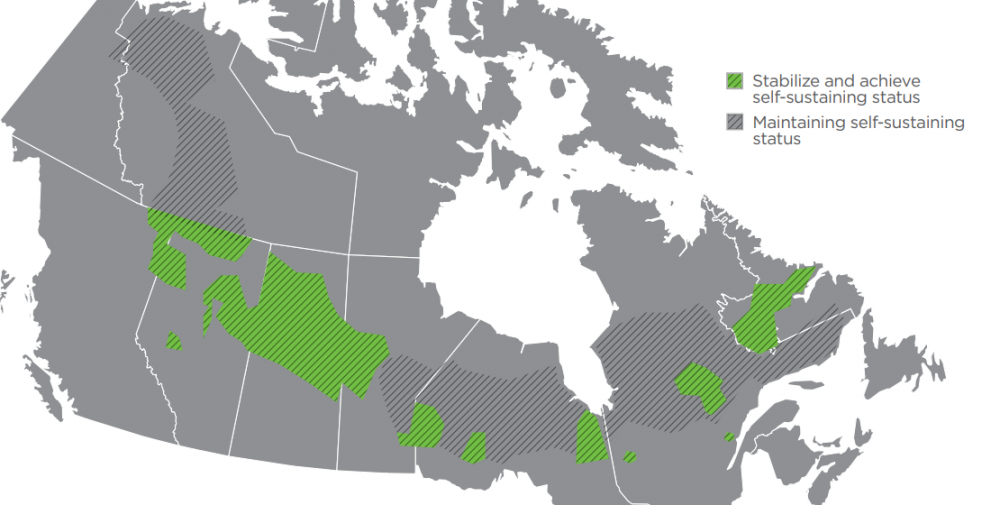 The oil and natural gas industry is collaborating to increase the pace of caribou population recovery. In Alberta, industry is working to reclaim land disturbances such as roads and seismic lines, and participates in breeding programs to help increase the size of caribou herds. Through Canada’s Oil Sands Innovation Alliance (COSIA), initiatives are underway to address legacy linear disturbances and return the boreal forest to high quality caribou habitat.

Through the Regional Industry Caribou Collaboration (RICC) members are working with academia, the Government of Alberta and the Alberta Biodiversity Monitoring Institute (ABMI) Caribou Monitoring Unit to prioritize areas for caribou habitat restoration and co-ordinate research and monitoring efforts at a regional scale.

Industry in Action: Kristen is Speeding up Reforestation to Improve Caribou Habitat

Biodiversity is the variety of life in a habitat or ecosystem. Oil and natural gas development can affect biodiversity in a number of ways, including disrupting habitat, making predator movement easier through travel corridors such as roads or seismic lines, or degrading habitat quality.

Oil and natural gas activity occurs in diverse landscapes that are home to many species of plants and animals, including species at risk and invasive species. Managing biodiversity is guided by the Canadian Biodiversity Strategy, and the federal Species at Risk Act, plus provincial policy and legislation.

Northern Alberta is home to lots of wildlife. In order to minimize disruptions to birds, wildlife and habitat, oil sands companies need to know where they are. Until recently, monitoring wildlife was a labour-intensive and specialized skill. The development of new guidelines and ways of working for acoustic recording units (ARUs) allows wildlife data to be gathered accurately and continuously.

Operators in Canada support sound scientific data collection and are collaborating with each other, and with government, communities and scientists.

The Alberta Environmental Monitoring, Evaluation and Reporting Agency (AEMERA) is responsible for wildlife and biodiversity monitoring in the oil sands region and administers the Joint Oil Sands Monitoring (JOSM) program. AEMERA evaluates the cumulative effects of operations on biodiversity, based on data gathered by the Alberta Biodiversity Monitoring Institute (ABMI). The ABMI facilitates collaboration between government, industry, academic and environmental groups on maintaining Alberta’s biodiversity.