Q. What is causing the high prices at the pump?
A. The price at the pump is a function of increased demand and lagging supply combined with the geopolitical turmoil resulting from Russia’s aggression in Ukraine as well. Lagging supply chains issues continue to drive inflation for oil and gas companies, in some cases as high as 30% for some operators. Further refinery margins referred to as crack spreads remain strong contribute to the cost paid at the pump.

Independent oil producers in western countries, including Canada, are working hard to bring on additional production that will help alleviate higher global commodity prices but are currently market constrained by current levels of egress. The Trans Mountain Pipeline (TMX) will help to alleviate some of these constraints and the industry is grateful to the federal government for their efforts to ensure TMX is completed but egress continues to be a going concern.

Q. Countries around the world are contemplating or have enacted “windfall taxes” to combat rising inflation, why should Canada be different?
A. All provincial royalty regimes in Canada have a sliding scale approach to royalties that incorporate higher commodity prices—in other words, royalty rates increase with higher oil and gas prices, thus acting as an algorithmic windfall charge. This differs from many other jurisdictions globally like the UK, where their domestic oil is currently subject to a 40 percent headline rate of tax consisting of a 30 percent Ring Fence Corporation Tax (RFCT) and 10 percent Supplementary Charge to Corporation Tax (SCT) that are not commodity price sensitive. Companies in the UK are able to apply levy losses back for 12 months against previous levy profits and three years for terminal losses against the headline tax rate of 40%. Further deductions are provided in the UK against the RFCT tax and SCT tax for decommissioning costs, financing costs and investment allowances. Neither the RFCT or the SCT are commodity price dependent.

In contrast provincial royalty regimes account for higher commodity prices. The Alberta Oil Sands for example, has a post payout net royalty of between 25% and 40% depending on the price of oil. 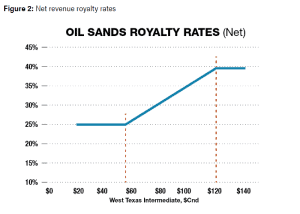 The same applies to conventional oil and gas, in British Columbia for example, natural gas royalty rates are determined every month for each well event or tract in a Production Entity (PE). The royalty rate can be up to 27% of the value of the natural gas and is based on: whether the gas is produced from Crown Land or freehold land, and the reference price of the plant and the select price. Income taxes, sales taxes and property taxes are all paid on top of any royalties paid to governments. 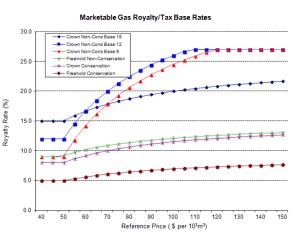 Source: BC Ministry of Finance

Q. Are other taxes on the energy sector sensitive to higher commodity prices, including municipal taxes?
A. At the municipal level, provincial governments like the Government of Alberta annually insert Assessment Year Modifiers (AYM’s) which are mechanisms to adjust the base assessment value of oil and gas assets up or down to reflect present costs and economic/market conditions.

In a higher commodity price environment, oil and gas assets will be assessed higher and therefore pay more in municipal taxes to the municipalities where they operate. For example, when oil and gas companies pay their property taxes this year, it will reflect an inflationary modifier which will result in more taxes being paid by virtue of the improved economic conditions in 2021. This will only be increased substantially for 2023 property taxes payable given the even more robust 2022 economic conditions.

Q. In this higher commodity price environment, how much do Canadians stand to collect in the form of royalties and taxes this year?
A. Canada is set to see a year-over-year growth of 283% in royalties collected from the four producing oil and gas provinces. In Alberta the province is on track to easily eclipse the $511-million surplus forecast in February 2022 Budget. The Alberta government’s latest fiscal report shows the highest turnaround in Alberta history – with $16.17 billion in revenues from non-renewable energy resources eclipsing the previous record set in 2005-06 of $14.34 billion.

Higher commodity prices are translating into higher government take across the country, this contrast with the UK that had a flat tax rate where companies were able to apply previous deductions from years prior.