Climate change is a global issue, requiring action from individuals, governments, organizations and industries around the world. Addressing climate change is bigger than one industry or one country - it requires a global perspective. But Canada is uniquely positioned to help meet global climate commitments by providing an alternative to coal in Asia through LNG exports.

Canadian Emissions in a Global Context

Canada produces less than 1.5% of the world’s greenhouse gas (GHG) emissions. Of that, Canada’s oil and natural gas industry produces about 0.3% of overall global GHG emissions.

By acting globally, Canada can make an outsized contribution on addressing climate change.

The challenge is how to reduce global GHG emissions while the global demand for energy is growing. Through innovation, technology and responsible energy production, Canada is uniquely positioned to help meet this challenge.

Canadian energy can offer solutions to GHG emissions and climate change, among the biggest challenges facing the world.

Canada’s oil and natural gas resources are among the most responsibly produced energy sources on the planet, under the most stringent environmental regulations in the world. In Canada’s oil sands, emissions have fallen significantly. 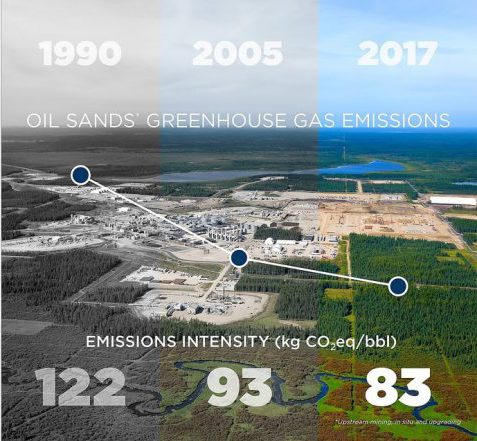 Since 1990 GHG Emissions Per Barrel Dropped 32%

Canada has a huge potential role to play in reducing net global GHG emissions. A single liquefied natural gas (LNG) export facility, exporting Canadian LNG to offset coal use in other nations, can reduce global GHG emissions by 100 megatonnes; the equivalent of taking every passenger car in Canada off the road. Imagine what five LNG plants could do!

Developing energy resources, and transporting those resources to consumers, is a challenge that demands innovative solutions. But that’s nothing new for Canada’s energy sector, which is a technology-driven industry. The largest oil and natural gas producers in our country are pledging meaningful reductions to GHG and methane emissions, and their results prove Canada can transition to a low-carbon economy while still creating prosperity and protecting the environment.

From exploration to production, the industry is working to reduce emissions in every process and activity associated with oil and natural gas. Some examples:

Small leaks of methane, called fugitive emissions, come from valves, pump seals, and other equipment used in natural gas drilling and production. Methane is also released when natural gas is flared or vented.

Of the almost 10 billion tonnes of carbon dioxide (CO2) emitted globally in 2015, nearly half came from coal.

Canada can become a world leader on climate action through technology and innovation, and by continuing to develop natural gas responsibly. Electrification of upstream production is an important step in this process.

Alternative to Coal in Asia

In fact, for every LNG facility built in Canada, global emissions could be reduced by 100 megatonnes of CO2 equivalent (MtCO2e) per year. Estimates show that by 2040, about 1,500 MtCO2e could be eliminated every year if new power plants in China, India and Southeast Asia are fuelled by natural gas instead of coal. (Source: CAPP)

According to the Canada Energy Regulator (CER), electricity generation in Canada must grow 30% by 2040 to meet demand, with natural gas-fired and renewable-based energy showing the largest increases. The CER expects power generation from natural gas to increase from 10% to 16%, and generation from renewables to grow from 5% to 11%. (Source: Canada’s Energy Future 2018: Energy Supply and Demand Projections to 2040)

Canada is a world leader in climate policy. Compared to global competitors, Canada has one of the world’s toughest climate policies based on price and stringency. Climate policy is governed in Canada by provincial and federal governments.

Currently, several provinces have put a price on carbon and the federal government intends to implement a backstop policy for provinces without a carbon price. The federal backstop would raise the carbon price to $50/tonne by 2022. Find out more:

Climate change policies also have a different kind of price. As the cost of doing business increases – resulting from policies such as carbon pricing, compounded by other policies and regulations – investment in the oil and natural gas industry is decreasing or leaving Canada altogether. Companies are choosing to invest and produce in other countries where climate change policies are less stringent or don’t exist. This situation, called carbon leakage, results in no net reduction in global GHG emissions.

CAPP supports policies that are efficient and effective. Many jurisdictions around the world, such a California and the European Union, use an emission-intensive, trade-exposed (EITE) method to help prevent carbon leakage and help protect EITE industries. Canada’s oil and natural gas industry qualifies as an EITE industry. Canada needs mechanisms to protect competitive parity across international jurisdictions and provide regulatory and cost certainty.

Video: What is Carbon Leakage

Canada’s oil and natural gas producers are ready and willing to do their part to contribute to the overall Canadian plan on climate change. CAPP and our members have developed principles to help guide creation of effective climate change policy in Canada:

What is Article 6? Why does it matter to Canada?