What are the Oil Sands?

Canada’s oil sands are the largest deposit of crude oil on the planet. The oil sands (or tar sands as they are sometimes inaccurately referred to), are a mixture of sand, water, clay and a type of oil called bitumen. Thanks to innovation and technology we can recover oil from the oil sands, providing energy security for the future. 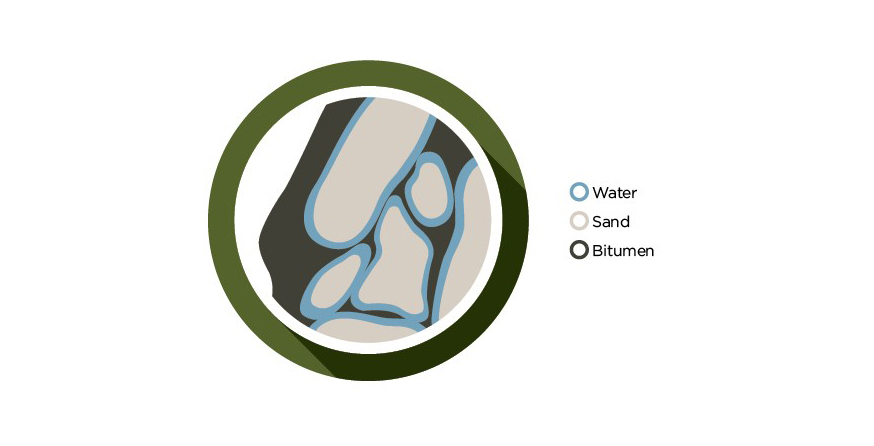 Oil sands are a mixture of sand, water and bitumen (oil that is too heavy or thick to flow on its own). Bitumen is so thick that at room temperature it acts much like cold molasses. For that reason, this resource is sometimes called “tar sands,” but that term is incorrect because bitumen and tar (asphalt) are different compounds. “Oil sands” correctly identifies the end product derived from bitumen: crude oil.

Oil sands deposits are found around the world, including Venezuela, the United States and Russia, but the Athabasca deposit in Alberta is the largest, most developed and uses the most technologically advanced production processes. Commercial-scale production from Alberta’s oil sands started in 1967 when the Great Canadian Oil Sands (now Suncor Energy) started operation.

Where Are Canada’s Oil Sands?

Canada’s oil sands are found in three regions within Alberta and Saskatchewan: Athabasca, Cold Lake and Peace River, which combined cover an area more than 142,000 square kilometres (km2). Contrary to some exaggerated reports, the current active mining footprint is about 1,030 km2 – an area slightly larger than the City of Calgary.

Getting the Oil Out

How Oil is Recovered

A variety of oil recovery methods are currently used for oil sands production, and new methods are put in place as new technology is developed.

About 20% of Canada’s oil sands deposits are within 70 metres (200 feet) of the surface and can be recovered with surface mining, but most oil sands reservoirs are deeper and require drilling and production methods called “in situ,” which creates much less surface land disturbance and mining.

From Oil Extraction to Consumer

Some bitumen is diluted with lighter hydrocarbon to make ‘dilbit’ so that it will flow through a pipeline. Alternatively, bitumen may be upgraded to make heavy crude oil. Both these products can be further refined to make gasoline, diesel, jet fuel and other petroleum-based products.

Once extracted, the bitumen is refined. Some refining is done within the oil sands region or other Alberta refineries, but most is sent to refineries all over North America via pipeline, rail or marine transport.

Economic Benefits of the Oil Sands

Canada’s oil sands are an important part of Canada’s economy and help create jobs across the country, both directly and indirectly.

Oil sands operators must adhere to stringent regulations. Approvals from numerous regulatory agencies are required at every phase, from construction and operations to shut-down and reclamation.

Companies within Canada’s oil sands industry collaborate to jointly develop technologies that reduce impacts on air, land and water, and provide benefits for our country. Industry is also committed to providing a safe workplace for employees, contractors and communities

The Facts on Oil Sands was designed to give readers fast, easy access to oil sands facts to help them participate in the discussion. Facts are sourced from credible third parties or are developed using CAPP data that is checked against other data sources, including government reports.